SocialAR: Bridging the Gap between Brands
and Customers Through Immersive Experiences

Augmented reality is an immersive experience through which we can place digital objects in a real-world setting. As augmented reality (AR) technologies become more prevalent, interest in the various divisions that encompass them is increasing. One such extension that is gaining popularity in recent times is socialAR.

In 2017, Facebook joined the game and introduced their AR tool called Camera Effects, which later got renamed to Spark AR and then expanded to Instagram as well. Brands can now use Spark AR to create immersive and interactive experiences for their followers. It also allows them to run effective socialAR campaigns using their creations made on Spark AR and monitor their ROI. As a result, we can see how socialAR has evolved over time. From being limited to just filters to optimizing data related to those filters today, socialAR has come a long way.

AR and social media are now inextricably linked. socialAR is a fun, memorable, and convenient way for users to connect and communicate with each other as users can now click AR selfies, add fun lenses to their photos, and even create their own socialAR filters!

The most challenging part of the global acceptance of augmented reality is that it requires a lot of habit building. This is where socialAR comes in. It facilitates faster adoption of technology by providing a fun and interactive way to billions of users who engage with social media.
‍
In the US alone, there were 43.7 million people in 2020 who used socialAR at least once a month. 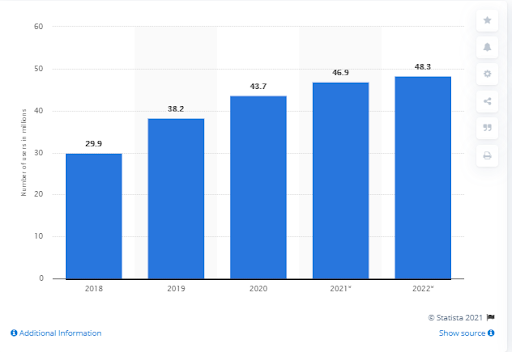 Thus, as a result of rapid consumer adoption of socialAR, a dynamic ecosystem is being formed which in turn is encouraging brands to hop on board and engage with their consumers through socialAR.

Brands that are engaging with socialAR

Since Facebook launched Spark AR, brands and individuals have been able to create their own socialAR filters, resulting in an explosion of brand-generated and user-generated AR filters on Instagram and Facebook. There are thousands of brands that are using socialAR to promote their business and are championing it as the cornerstone of their marketing strategy.

Brands like Starbucks, IKEA, Nike, Sephora to name a few have all successfully launched custom Instagram filters to promote their brand and have generated millions in engagement and revenue. Luxury brand Gucci, engaged with socialAR by incorporating its logo on a custom face filter that can be enjoyed by a wide range of users. This market will certainly continue to grow with brands all over the world releasing their own bespoke filters and engaging with socialAR.

Taco Bell experimented with Snapchat AR filters in 2016 and discovered that the time unique users spent engaging with the filter equaled 12.5 years of play – in one day. Also, the average user played with the filter for 24 seconds before sending it as a snap. The filter garnered over 224 million interactions in one day This shows that socialAR dramatically increases the visibility time of a brand without the need to spend thousands of dollars on the advertisements with equivalent time durations.

Another, great usage of socialAR was shown by Unilever’s Dove. They created an Instagram AR filter where customers could try new hairstyles. The campaign was an instant hit and accumulated over 22 million impressions, 800K captures, and 65k+ shares.

How is India reacting to the socialAR craze?

Given how well users are interacting with socialAR, it is clear that this extension of AR  will play a significant role going forward, and no one will rejoice in this more than brands who will be able to market themselves, their products, and their services in unique, exciting and engaging ways!