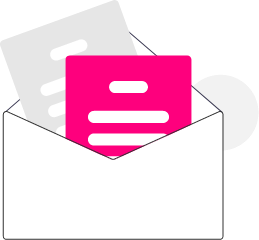 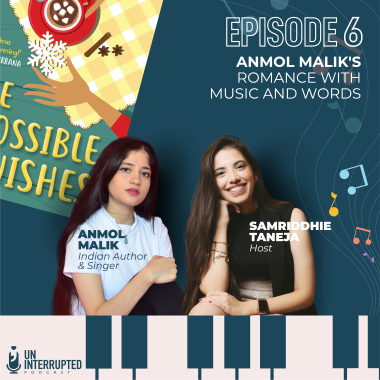 Uninterrupted is a platform that was merely curated with one goal, to build a community: a familiar thread to connect with like-minded people. Our guest this week is a super talented ray of sunshine. She's a published author, a successful singer-songwriter, she has worked in Bollywood films, and has a knack for anything that gets her creative juices flowing. She’s none other than Anmol Malik!

What is your first ever memory of Bollywood or the music industry?

Since my father makes music for movies, there would always be directors who would come home to the studio. There was a little sitting room that he had made in the house. I would always be standing by the door listening to the conversation happening inside. The director would be describing a scene, and he would probably want music. My father would be playing the harmonium along with the narration because it got his creative juices flowing. He wanted to see what notes work best for the scene, To be able to witness that, to hear it bleed through the door. I think that's my first memory because I think that's what married stories and music for me.

When did this romance with words begin?
I'm just always making up stories in my head. If you find me at any point in time, I might be speaking to you, but there's always something running at the back of my head. There's always a dialogue. There's always a situation. I think I love observing people. It's weird, but I'll be observing my friends, I'll be observing situations and they'll just get lodged in my head somewhere, and it'll start cooking in the background. Finally one day it emerges as some scene, somewhere.
‍
When was the first time that you wrote something?

In the first grade, we had an inter-school competition. It was at the YMCA in Bombay, and we had schools from all over India who were participating. They would give you an image, and they'd give you around half an hour to create a story in under 1000 words. Then you'd have to come in and narrate the story to the entire audience. I didn't know anything like that existed. The image given to all of us was of a very handsome prince on a frog. And there was this giant moon behind it. I remember I wrote it down, but midway while narrating, I forgot what I had written, and you're not allowed to look at what you had written. I think I enjoyed making up a story on the spot in front of an audience. I got second place in that competition.
‍
Did you ever think that you were going to become a published author?
No. This was a desire of mine. I wanted this. I've worked towards it. But I've worked with it with no intention of ever coming through. I had zero expectations of ever getting published. It feels unreal. I can't explain to you how grateful I feel that not only did the book get published but that it was picked up by HarperCollins. which in itself feels completely unreal. I wrote the entire first draft of three impossible wishes, without ever thinking it would get picked up or that I'd ever heard back from anyone.
‍
How does it feel when you look at your book at a shop front?
It never gets old! I have a copy of it on my writing desk, and every time I turn to it, it doesn't feel like it actually exists. I always touch the cover and go like, “Okay, I made this. This is ridiculous! How did it happen?”

Why did you choose to write rom coms?
I think a good rom-com is like a slice of life, but it's kind of package as a gift in lots of happiness and sunshine. I love Richard Curtis' writing and I think he's very clever. Not only is he very economical in the way he uses his words, but every character kind of represents British society at that point in time. A lot of the slang that I picked up along the way a lot of the customs that I learned, I've actually learned by watching rom coms. For me, rom coms cover the entire gamut of emotions. They cover love, friendship, society, the way you're currently living, different economic classes, different racial backgrounds, and you get it like a little Christmas gift. So I don't know what’s not to love about rom coms.
‍
How much of your book is inspired by your own life?

Richard Curtis said that he finds it very difficult to write about what he doesn't know. Anytime he tries to do that, he ends up sounding fake. I have realized that there is some truth to it. So ‘Three Impossible Wishes’ has a lot of me, not just in the protagonist, but in every character. So even if the characters are slightly negative, they’ll probably have my negative shades in them. It would be based on a lot of the things that I've seen. A lot of the things that I have grown up around. For an artist, it's very difficult to hide the inner workings of their mind. When you’re creating something, who you are will always bleed out onto paper.
‍
Does this apply to creating music as well?
I only end up writing music or stories when there's a voice in my head that persuades me to. So I can actually hear the song, and then I just have to play it on a piano and note it down. So it's difficult to explain what the process is like. But the best way I can describe it is that there's this feeling in your heart. It sounds like a spoken word. It sounds like a song that's already playing, and you just kind of sing it out loud. So I think with music, it's a bit difficult to say. You can choose what to write about, but I don't think you have any control over what comes out in terms of music.
‍What is your ideal source of inspiration, when it comes to your music?

I can write pretty much anywhere, as long as creativity strikes. But if I had to pick a time, I think then I would pick the one that I've chosen for my normal writing schedule, which is quite early in the morning. That's when I'm not completely awake. Therefore I'm not constantly judging myself and editing and filtering out my thoughts before they come out on paper. I find I can be quite self condescending, I can hate everything that I do. And that's not the best way to be when you're creating something. So first just blurt out, whatever you have- good, bad, ugly.

Have you found any ways to deal with this self-criticism?
I haven't learned that yet. Firstly, I have so much more to learn in terms of even the craft because I've just started out and it's all very daunting, not just the craft, but the publishing space itself. I don’t know how to be kind to myself and I have a very bad feeling that I never will.

What’s the favorite recording that you've ever done?
I swear I'm not trying to be nice, but every recording has been my favorite one. And I'll tell you why. Because it's such an honour as a singer when you get into the recording booth. The music director has trusted you with his tune, the lyricist has trusted you with their words, the producer has booked the studio, the director has a vision, the musicians have played their part. I feel very grateful that I get to stand there and be a part of the team. It just feels like a giant honour.

What advice would like to give to anyone who's starting out as a writer?

Firstly, writing is a very isolating process, it's just you and what you're writing for hours, days, and months on end. So, the subject that you choose to write about should be something you love immensely.
Secondly, as Roald Dahl said, whenever you start writing, complete what you're writing because as a writer or as a creator, you get very tempted to suddenly take up a new subject or a new idea and leave what you’re working on now. But please don't do that. Once you start, see it to the end.

If a genie could give you three impossible wishes that could come true today, what would you wish for?

I really hope I get to write more because that’s something I really love from the bottom of my heart. Secondly, I just wish everyone was happy and the third wish is that I wish I was as clever as Arya.

If you could pick a Bollywood film to give your music to which one would it be and why?

Bollywood is what runs through my veins. I'll take the safe route out and say I hope it's a film that I've written and therefore I write the music in it.

What’s a book that you keep going back to?

The Hitchhiker's Guide to the Galaxy by Douglas Adams is number one on my list. And the second one would be Persepolis by Marjane Satrapi. I cannot believe I could learn about the history of the nation in such a light way.

If you could either write or sing for the rest of your life which one would you pick?

I can’t choose between them because I have always believed there's a certain rhythm to storytelling, and there is a certain amount of storytelling to music, so they're together for me. I can’t pick!


To catch the full candid podcast tune into Uninterrupted by clicking here!