Facebook is Now Meta
(And What it Means for AR?) 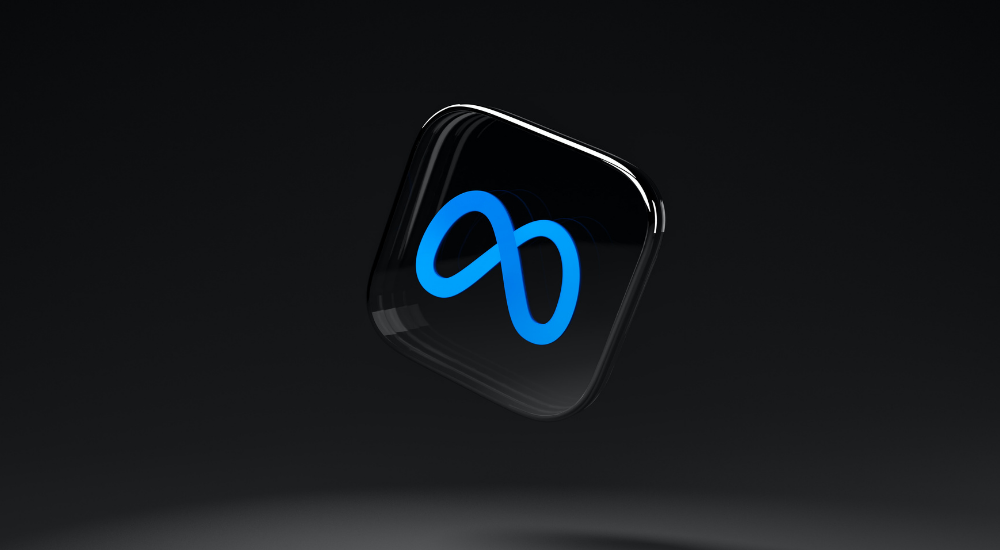 “Throughout our computing history, a major new platform has emerged every 15 years or so that has tied technology more naturally to our lives. We have again arrived in such a period where the next logical technology is an immersive computing platform that gives us a magical sense of presence. You can be with another person in another place without leaving your own location, and that is the promise of AR and VR technology.”

This is how Mark Zuckerberg described his vision with Facebook Reality Labs back in August 2020. And just a few months after, Zuckerberg rebranded his company from Facebook to Meta saying that the new name will now reflect the company’s ambition to work behind metaverse.

Zuckerberg’s plans for Facebook Metaverse were not really a secret. It started back in 2014 when the company acquired Oculus VR for nearly $2 billion to extend its arm in VR technology within the gaming vertical. Over the years, Facebook, now Meta, has made a series of acquisitions in the AR-VR space and poured billions of dollars into its AR-VR research and development wing called Facebook Reality Labs. Meta has also been quite vocal about developing AR smart glasses and in September 2021, we saw them hit the market as well.

Nearly 10,000 employees in Meta work just on AR and VR

Back in 2017, UploadVR reported that of the 18,770 employees Facebook had, almost 1,000 of them just worked in the Oculus VR division, developing the standalone VR devices that we now have in the market as Oculus 1 and Oculus Quest 2. That was over 5% of the net staff size dedicated just for AR and VR. Fast forward to 2021 and The Information noted that Facebook had over 10,000 employees working in its Reality Labs segment that had consumed all of the company’s AR-VR initiatives under its umbrella.

While announcing its name change to Meta, the company said that it plans to hire 10,000 more professionals in the next five years from Europe and their job will just be to take the Facebook Meta vision forward. According to Meta, its Reality Labs will become a separate reporting unit to the company, attract an investment that will reduce Meta’s operating profit by $10 billion, and be responsible solely for developing and extending AR and VR into more verticals.

On October 28, 2021, Facebook CEO Mark Zuckerberg announced the name change during the company’s live-streamed conference. Zuckerberg emphasized that the new name, Meta, will reflect the company’s focus on building a metaverse, rather than directing attention to the popular social media app where it all started. According to the CEO, Metaverse will be the successor to humanity’s previous groundbreaking technology - mobile internet - and Meta intends to build on existing technology to become a leader in AR and VR.

During the conference, Zuckerberg demonstrated what the Facebook Metaverse would look like and explained Meta’s visions of allowing people to connect to this virtual world as avatars from various places and be transported to different periods.

Facebook/Meta was betting on AR and VR for years

Following its acquisition of Oculus in 2014, Facebook took its time to extend its VR technology and launched Oculus 1 VR headsets in 2019. Over the five years, it developed the standalone VR gadget that does not need a personal computer for integration and acquired several companies back-to-back to improve the VR gadgets. In 2015, Facebook acquired Pebbles Interfaces for its human gesture interaction technology. And in 2016, it acquired The Eye Tribe - a software company that enables hands-free eye control on mobile devices.
‍
In the AR sphere, Facebook’s most influential launch was the Camera Effects Platform in 2017. Now it is known as Spark AR and is responsible for every augmented reality feature we see on Facebook’s applications. Since its launch, more than 600,000 AR creators from across 190 countries have contributed over 2 million AR effects to Facebook and Instagram. The recently-launched Meta Smart Glasses in partnership with Ray-Ban has Spark AR features built into it. But Facebook’s depth in AR technology is really visible in its video calling device called Portal.

Launched in 2018, Portal is a dedicated device meant for video calling your Facebook friends and Messenger connections and comes in 2 sizes. It is equipped with a Smart Camera, Alexa voice control, and more importantly, Spark AR’s full range of augmented reality features. For example, the Story Time feature on Portal enables users to bring their stories to life with custom visuals and sound effects. And you can naturally use a wide variety of AR filters during your video call. In a promo launched by Facebook recently at the F8’s developer conference, the company showed a group having a virtual birthday party where a party hat appeared on every participant’s head and stayed there no matter where the people moved. This was Spark AR’s capacity in full view.

In 2019, Facebook Meta’s Oculus division acquired Beat games. The game developer and VR pioneer, Ready At Dawn, joined Facebook’s list of acquisitions in June 2020. The company moved forward to acquire Downpour Interactive in April 2021 and the BigBox VR team was the latest addition in June 2021. Meta is now stepping up its presence in the VR gaming vertical. According to the data released by IDC in October 2020, Facebook’s Oculus Quest 2 shipment rose by almost 207.4% as compared to 2019 and the company intends to hold on to that popularity.

During the rebranding announcement, Meta has already shared its plans to launch a slew of AR and VR products in the coming months. Along with the AR-enabled smart glasses, we might soon get Horizon Home from Facebook Meta where we can use our Oculus or now Meta VR headsets to call our Facebook friends and invite them to talk in a social version of their homes. As of now, there is no stopping Meta’s advance in the Metaverse space.

Are you ready for the AR revolution?

A big tech company betting on a futuristic idea almost always means that its real applications are not far behind. We saw that with Apple and personal computers, Microsoft and Windows, Apple again with smartphones, and Google with search engines. Now Meta’s billion-dollar investments in Facebook Metaverse only mean that AR and VR are set to spill over the gaming sector. And unsurprisingly, we are seeing the XR technology’s presence in healthcare, pharma, finance, retail, fashion, manufacturing, education, and others.

Bain & Company reported that by 2023, the market adoption of AR and VR technologies would grow by 75%. 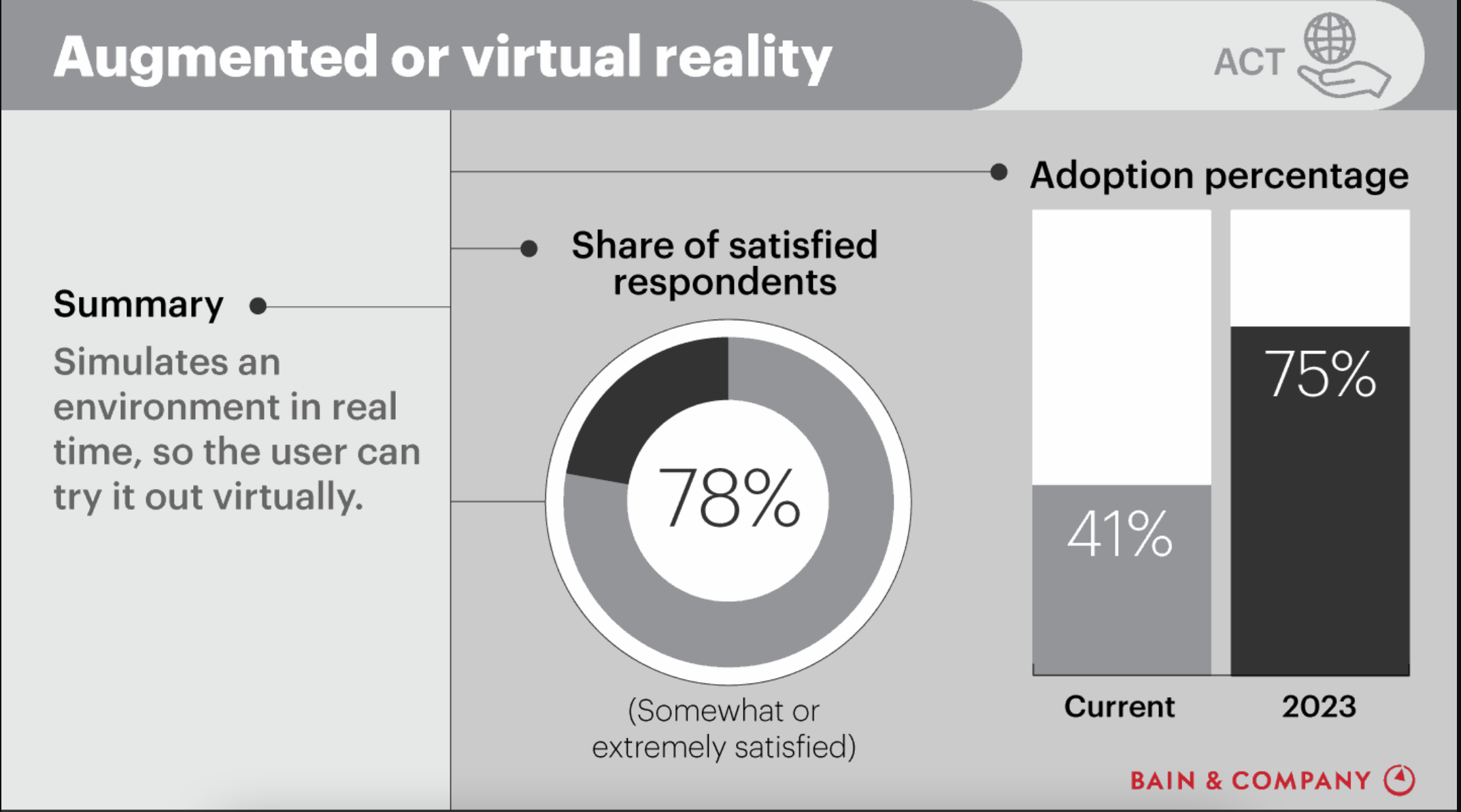 Another study revealed that between 2021 and 2025, the market size of AR and VR will grow by almost $162.71 billion - showing a compound annual growth rate of 46% in the stated 5-year span. The report also says that AR headset shipments will grow at a CAGR of 138% till 2025, and the project valuation of the shipments alone will stand at $28 million.

From the market’s perspective, reports reveal that 61% of consumers now prefer brands that promise them an AR experience. 71% of active shoppers agree that they shop more if an AR experience is available with a retailer in some form. A study in Japan revealed that 66% of the country’s consumers want offline stores to provide AR experiences because that enhances their customer experience with the brand. 32% of consumers worldwide used AR shopping features in 2020 and 40% of them say that they are ready to pay more if the brand offers AR shopping experiences.

Naturally, both big businesses and customers have started accepting AR as an important technology. If you are still not ready for AR integration, you are simply missing out.

Try the metaverse with this video

mirrAR is an immersive Augmented Reality platform, specifically designed for retailers, to offer an immersive experience to their customers. The mirrAR solution allows you to provide a virtual try-before-you-buy feature that almost always enhances the customer experience with your brand. You can integrate the AR feature in your physical brick-and-mortar store or infuse it into your existing website and mobile application. This way, you expose your entire inventory to your customers to virtually try-on, without any limitations of store size or secure shipment.

The market has already moved on to the AR-VR space. Facebook Metaverse just solidified the technological transformation we are witnessing all around. As a jewelry business that needs to bounce back post the pandemic and build credibility among your customers, you need to adopt AR soon to help your bottom-line results. Contact the mirrAR team and explore your options. AR is indeed the way forward.